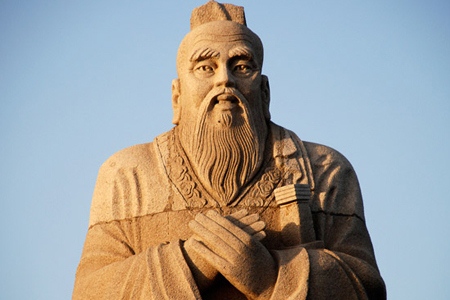 Confucius (孔夫子) is the anglicized name Kong Fu Zi or K'ung-fu-tzu, which means Master Kong. He was born in the state of Lu in northeastern China and lived between 551-479 BCE. That period in China was not a peaceful and quite time, and the social unrest continued for another 300-years after Confucius.

Confucius came from what was called the shi (retainer/knight) class. Many of the shi would form groups or disciples following a master.

While Confucius one of the most influential thinkers in the history of China and the world, Mao in 1966 started the Cultural Revolution, which lasted for a decade. Among one of Mao's goals was to rid China of Confucius and his thought. While Mao thought that he knew Confucius, scholars do not.

One of the problems with getting a historical Confucius is that his thoughts were written down long after his. Writing like the Analects were compiled by disciples Confucius and their disciples over several centuries.

The first group of disciples saw Confucius a moral person who often faced hardship and suffering. Second group headed by Mencius viewed Confucius as politically active person wanting to work his way to the top and be rewarded for his work. Third group saw Confucius a heroic, brave, and courageous person, hence the term Master Kong (Kong Fu Zi). Somewhere in these three groups is Confucius.

However, Confucius was the most influential philosopher of the 5th BCE in not only Asia but the world. Depending upon the person observing him, he was admired or hated. Mao wanted him to be deleted from all Chinese thought and attempted to do so during his Cultural Revolution and failed. While we are not scholars, we need at least to attempt to glean some basis philosophical understanding of this Chinese sage. Confucius wanted people to build their ethics/morality by example. Confucius was asked by a disciple, and he said,"有一言而可以終身行之者乎？子曰： 其恕乎！己所不欲、勿施於人。" (A disciple asked: "Is there any one word that could guide a person throughout life?" The Master replied: "How about 'reciprocity'! Never impose on others what you would not choose for yourself.")