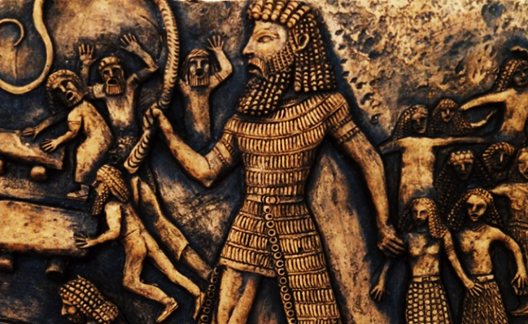 Gilgamesh was a king of the city-state of Uruk, Sumer

The issue of Gilgamesh is an interesting morphing of ancient history with mythology. There was an historical Gilgamesh who ruled in Uruk, which was a Sumerian city-state ca. 2800-2500 BCE. At his death, Gilgamesh was buried under the Euphrates River, which is one of the two major rivers in ancient Mesopotamia. The other river is the Tigris.

Several centuries after his death, Gilgamesh became the most famous figure in Mesopotamian mythology. He became a combination of a deity and a human. These myths in varying forms developed until ca. 1600-1100 BCE. It was then that a scribe by the name of Sîn-lēqi-unninni pulled the various stories together regarding Gilgamesh into what we call The Epic of Gilgamesh. The epic contains five stories: Gilgamesh and Huwawa, Gilgamesh and the Bull of Heaven, Gilgamesh and Agga of Kish, Gilgamesh, Enkidu, and the Netherworld, and The Death of Gilgamesh.

Gilgamesh seemed to have been a strict ruler, which caused Anu, a god, to create Enkidu. Enkidu was a bit of a barbaric wild man who lived in the wild with the animals. He left living in the wild, met Gilgamesh, and they went out into the world fighting for just causes. However, Enkidu died, which sensitized Gilgamesh to his own death.

Gilgamesh went on his quest to find immortality and found the only immortal in the world, Utnapishtim. Utnapishtim told him to find and eat a special flowering plant, because that alone would assure him everlasting life. Gilgamesh found this plant and returned home to Uruk with the plant intending to eat it. However, a snake ate it first. While the snake achieved immortality, it was a teaching moment for Gilgamesh. He realized that immortality wasn’t possible. He stated, “Forget death and seek life.”

While Gilgamesh failed in his quest for physical immortality, he comprehended the central reality of life. If he did good and noble things, he would achieve immortality, which would mean being remembered as a good and noble person long after his physical death. Gilgamesh repeatedly failed in his quest for his version of the Holy Grail. Nevertheless, Gilgamesh learned the importance of helping others, which has caused his immortality to endure for nearly 5,000 years.