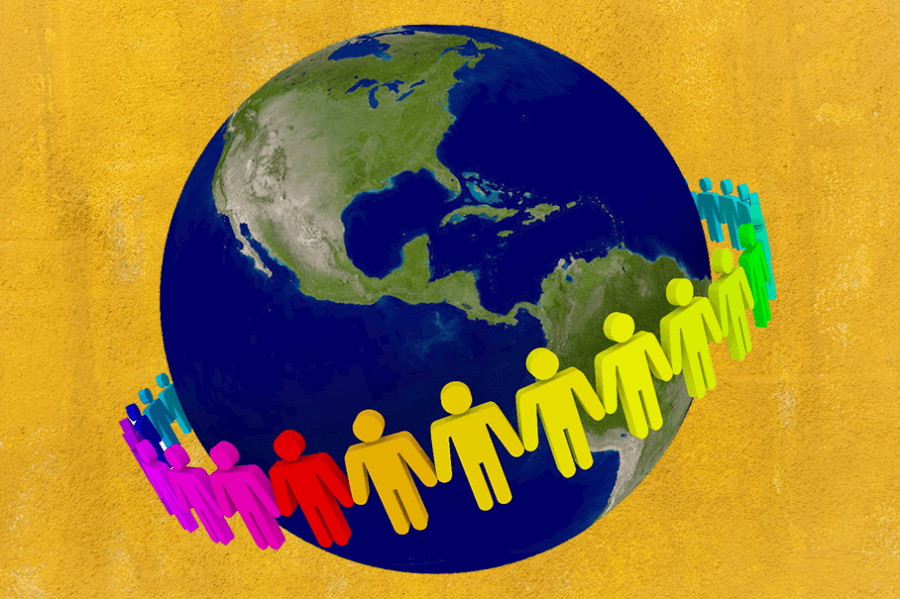 Nearly four decades ago, my doctoral thesis at McCormick Theological Seminary related to the local church functioning as an extended family. Regardless of one’s ethnicity within a local congregation, I wrote about the theological justification for the members of that church being a family.

Interestingly, years later that insight has risen to a much higher plateau. Having traveled many places throughout the world, my perspective has grown far more expansive than a local congregation. I can trace my seeing the light to my two trips to Myanmar/Burma. During winter break from teaching in 2013, I spent a month traveling in Myanmar’s tourist triangle.

When I returned to the States, I had a routine appointment with Dr. Marchand, my cardiologist. He checked my heart and said that I was fine and added that he would see me in six months unless I had any questions. I did have a question...a haunting question. Why was I so wired about my time spent in Myanmar? He looked at me and said, “You have seen the light”. Essentially, he wanted me to determine why that single country had radically affected me far more than the several dozen other countries that I had visited over the past half century.

I came up with several reasons without having to ponder his question. I had met and later interviewed Min Ko Naing, one of the major protest leaders involved in the 88 Uprising. He invited me to a protest rally that afternoon at Sule Pagoda where a quarter of a century before was the place of the 88 Uprising.

Additionally, I met Moh Moh, one of my tour guides while in Myanmar. I got to know Ko Ko, her husband, and their three daughters, Ti Ti, Snow, and Fatty. Ti Ti was nine at the time and happened to be on winter break while her younger two sisters were in a preschool daycare center. I visited the preschool and talked with the younger two. I met Ko Ko at their home, but Ti Ti and I played Scrabble and talked for nearly an hour. She is fluent in American English and is brilliant. I left their home feeling like I had met my granddaughter. My intention for going to Myanmar was to interview Daw Aung San Suu Kyi, often called the Lady. Instead, I discovered a young lady, Ti Ti.

Four years later, I returned to Myanmar and still wanting to interview the Lady. However, visiting with Ti Ti, Snow, Fatty, and their parents was my top priority. I spent the best week of my life with my family near Inle Lake. They showed me around the area, but we also just sat, talked, laughed, and played games.

Before I left to return to the States, I told Ti Ti that I don’t like using laptops for my online teaching and working on my webpage. I have two large monitors and wish that I had three. Therefore, my laptop, which I used for storing photos and videos that I took in Myanmar, would be taken home and download them to my computer. Then I would put the laptop on my bookshelf until my next trip, or I could give Ti Ti my laptop. I chose the latter.

Ti Ti and I were happy about my choice. Yet, what about the other children that go to school with my grandchildren? Most of them don’t have or have even used a computer. Those children are a part of my extended family. I can’t think of any educational tool that is more critically important than a computer for teaching and learning process regardless of age. This is even more true in an emerging nation like Myanmar. Computers are vital.

Then it hit me. I will raise the necessary money to provide laptops for the two schools that my grandchildren attend. I need to provide financial resources so that Internet providers can drastically increase bandwidth to facilitate content delivery, streaming lesson videos, and alike. Additionally, I need to assist the schools’ on-going costs of broadband expenses. I estimate that my dream of providing both schools with greatly improved bandwidth, some subsidies for ongoing broadband expenses, and 1250 laptops will be around $500,000.

This is where you come into the picture. I am asking you to consider one or more of the following requests. I’d suggest all three.

We are family. It is up to our family members to help others within the family. However, I discovered a truth that seems like an oxymoron. It is in giving that you get. You will feel the amazing reward as much as any of the students will feel with access to laptops. Trust me.


We Are Family in Myanmar, Inc. is a nonprofit charity. If you have any questions, please let me know how I can assist you. Contributions, which are tax deductible, can be sent to the following address.